Hollywood is a new series on Netflix by famed director Ryan Murphy. In short the drama series is about the importance of telling stories of every day people and why representation of minorities has long been overlooked by the old studio system.

Back in the day the film studios were run by old straight white men who told stories that glamorized their lifestyle. Very early on, the industry, was captivated by likes of Anna May Wong and Hattie McDaniels but instead of moving forward with change the industry for the next few decades decided to continue to create stories that celebrated white culture, leaving Anna May Wong and Hattie McDaniels to disappear into history.

Now what would the film industry be like if women, people or color or the LGBT had equal footing in the industry after World War II?? Where would we be now if women had been heads of the movie studios? The LGBT community were able to live openly and their stories told on film in the 1940s or 1950s? What if there were as many stories about people of color on screen? How different would life be today?? This idea is explored in Hollywood. 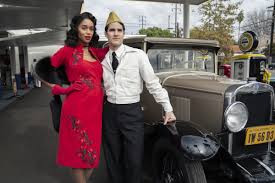 Set in the late 1940s in the years in Hollywood after WWII. The industry is at a juncture where the old overacting of the ‘20s and ‘30s is no longer in fashion and the movies are moving away from glitz and glamor to create gritty and real stories.

The story of Peg Entwistle has been developed into a script and is being floated around to the studios to be picked up. The script has been written by Archie Coleman (Jeremy Pope) who is African American and at the time most writers at the studios were male, straight white men. The script wins the attention Raymond Ainsley (Darren Criss) who works at ACE Studios and is trying to get the project funded by the head of production Dick (Joe Mantello).

Separately we are introduced to Jack Castello (David Corenswet) as he is a wannabe actor, trying to get a break and support his family. But the life of an actor is about learning to hustle and constantly seek out opportunities to get that elusive break.

Everything created by Ryan Murphy is done with such a high standard. This production is on par that it replicates the style and glamor of the old Hollywood days. The level of detail is second to none and it is enjoyable to sit back and take in the costumes, sets and imagery as it tantalizes your brain.

One thing you do need to remember when watching this show is there has been a large amount of creative liberty taken with the stories of known characters like Rock Hudson, Anna May Wong, Hattie McDaniels, Vivien Leigh, George Cukor et al. Make no mistake the representation of their personality traits are spot on, but the story is almost entirely fictional. Rock Hudson was definitely gay and struggled with his sexuality throughout his career living in the closet. But what was really nice about this story was the idea of what if. What if Rock was able to live openly gay, express his love to another man and be able to live as the gay community do today? I can’t help but wonder would things have ended up differently for him in the history books?

Hollywood by Ryan Murphy is a delicious feast for anyone who loves the tales of old Hollywood though the golden years. Murphy has done a tremendous job recreating the romance of the era that truly is something stylish and a joy to watch from the first episode until the last. Of course there are historic inaccuracies but this is a series about “Dreamland” and the fantasies that go with it, if you wanted a historical documentary maybe watch something on PBS instead.

Hollywood is currently streaming on Netflix.

Another Australian living in New York seeing what experiences it will bring. Don’t get me wrong, this has been a dream… about 16 years in the making!