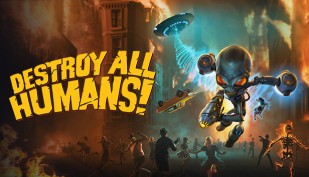 When I heard that there was going to be a remake of the great alien video game, I was one of the many people that was extremely excited. I played the first and second games so many times back with they were released on the Playstation 2 that I could still probably quote the lines from memory even now. I was especially excited to find that the creators of the remake were going to keep the voice actors of the original game in the remake. Then, I saw that it was essentially a remaster rather than a remake. Throughout the production process, they talked about how it was a remake and not a remaster, but clearly we have different definitions. We’ll get into that later.

First, let’s discuss the game itself. Destroy All Humans! is about Cryptosporidium-137, an alien from the Furon species, launching an invasion on 1950s Earth. Crypto and his boss, Pox, launch this attack as their race, having developed immortality via cloning akin to the movie the 6th Day, is slowly degrading with each clone, so they need pure Furon DNA which just so happens to be located in every human’s genetic code. Also, one of their scouts went out of communication while investigating Earth, though this takes a bit of a backseat. Crypto’s actions are quickly met with a defense by a mysterious government agency called Majestic, not to mention the army, local police, and trigger-happy farmers.

Now, let’s go over the differences between this ‘remake’ and the original game. The first difference is the most obvious and that is the graphics. They have been upgraded to fit with the current generation of games and are decent for the most part. The human characters still kinda look like they were carved out of clay, but given the cartoonish nature for parts of the game, that can be forgiven. Also, the controls are a lot smoother than they were in the PS2 era which makes it feel less like the player is controlling a Roomba and more like an alien with an advanced jetpack. Finally, there is the “lost mission,” a mission that was cut from the original game and added into this one. I just don’t see how this is a remake when everything is more or less the same.

I had a few issues with this game beyond the whole “remake/remaster” argument. The main one was the challenges that are found in each of the maps that the player can explore. It is something was brought over from the older generation. The idea of having side missions is by no means new nor is it uncommon to find in even the current generation. However, the newer games manage to meld these in with the main story to make sense as to why the character would take time to do them. This one does not. Another issue that I had with the game is the tutorial of the different aspects. Some parts of it are given as they are unlocked, but other parts are found in a menu you can’t access when you’re exploring the world, which is tricky considering how much there is to learn.

I want to be clear that, despite these small issues that I had, I still recommend this game. The dark humor made me laugh on multiple occasions, the controls were smooth and reacted well, and the story was still very entertaining. I’d give it 8.5 harvested brain stems out of 10.