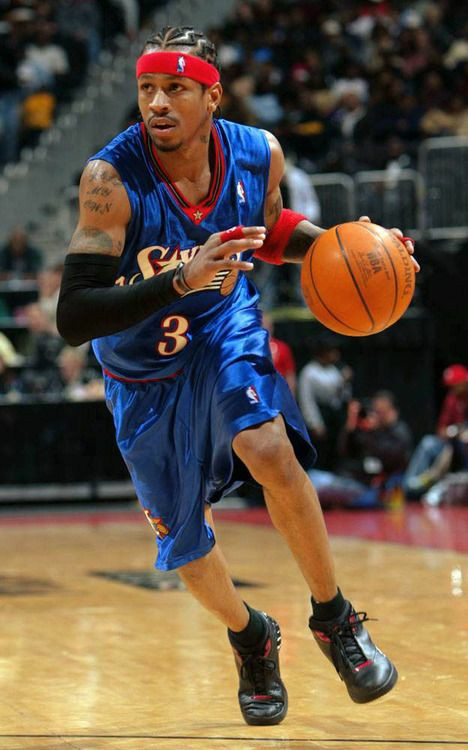 Basketball is one of America’s most popular sports and is highly appealing. Allen Iverson is one of the most popular basketball players in NBA history. I was curious about his life story and decided to conduct research: read articles, viewed interviews, documentaries, and speeches. Of course, these sources would barely be enough being that I never followed the player’s career, but it helped a great deal.

Iverson was born in Hampton, Virginia. His mother raised him and they later relocated to Newport News, Virginia. Iverson’s father spent time incarcerated, but they shared a close bond and he described his father as “the greatest father” in an interview with Stephen A. Smith (Quite Frankly with Stephen A. Smith). His love for his mother was and still is evident. He always praises her for being supportive, raising and loving him the way she did. During the first few years of his life, he lived in the projects before moving into a more decent neighborhood. All of the adults looked out for him as well as the other kids in the neighborhood. A collective of men served as his father figure including Gary “Mo’’ Moore and sports coaches. Initially, Iverson did not intend on playing basketball and believed that it was “soft”; he played football in his earlier years. His biggest influence was the great Michael Jordan. He always states that he “wanted to be like Mike”. Little did he know that his impact on the game would be just as potent to the modern world of basketball. In high school, he met the love of his life, Tawanna Turner. They attended rival high schools and had different interests, but naturally gravitated toward one another. While he endured fun moments, he was faced with adversities. When Iverson was in high school, he went to prison for an incident at a Hampton, Virginia bowling alley. A fight rooted in racial tension took place between Iverson, his friends and a group of men. Before things really escalated, Iverson exited the premises; if you watch footage, it is clear that he left. He was convicted of “maiming by mob” and went to prison for four months. Iverson was eventually “granted conditional clemency” by Governor Lawrence Douglas Wilder. Once released, he was able to successfully complete high school. The case gave Iverson a bad reputation and colleges were unwilling to be associated with him. Prior to the incident, he had numerous institutions reaching out to him about potential enrollment thanks to his basketball abilities. With the help of Iverson’s mother, Coach John Thompson of Georgetown University was convinced that Iverson deserved the opportunity to continue his education while playing the game he adored. He continues to give credit and respect to the coach for taking a chance on him; in his Basketball Hall of Fame speech, he thanked Coach John Thompson for saving his life. Iverson made the decision to leave college, which disappointed some people. However, he made the decision in order to take care of himself and his family. At home, their living conditions were poor. He felt guilty about attending school in a nice environment, sleeping in a comfortable dorm room, all while leaving his family behind. Iverson was prepared to embark on a new journey. During his sophomore year at Georgetown, he became the first pick in the 1996 NBA Draft for the Philadelphia 76ers. While on the team, many considered him a “selfish player”. The Philadelphia 76ers needed additional work and did not win enough games during Iverson’s rookie season. The team had to usher in a new coach, Larry Brown, due to a period of losses and a desperate need for change. His sometimes-rocky relationship with Coach Larry Brown was evident. The two were different in many ways; Brown wanted Iverson to approach the game one way and gave constructive criticism, Iverson wanted to play the game his way. Conflicting views off the court between the two caused them to bump heads. However, Iverson eventually learned to take constructive criticism. He developed a strong admiration for Brown; “he is the greatest coach I have ever been around… I got a lot of respect for him, I love him, he taught me a lot” (Quite Frankly with Stephen A. Smith). Once they reached common ground, the 76ers became invincible. Iverson also played for other teams for short periods of time: Memphis Grizzlies, Detroit Pistons, Denver Nuggets, and the Besiktas (a Turkish Eurocup basketball team). He’s had many accomplishments: 1997 NBA Rookie of the Year Award, 2000 Source Sports Athlete of the Year Award, 2001 BET Award for Sportsman of the Year, and winner of the 2001 and 2005 All-Star Game Most Valuable Player Award. He officially retired after a fourteen year long career on March 1, 2014. Iverson makes major contributions to organizations dedicated to the youth, giving them the opportunity to make changes within their communities. In 2020, Iverson along with the Philadelphia 76ers joined the All-In-Challenge for Covid Relief. Despite controversies, Iverson and Turner are currently together and share five children.

In the late 1990s to early 2000s, Iverson’s popularity grew for a multitude of reasons. Where nowadays we see more than one star player on a basketball team, in his prime, he was the key player of the Philadelphia 76ers. His signature crossover move and skills on the court impressed fans and even intimidated opponent players. He has an extensive endorsement deal with Reebok. Iverson’s fashion statements were bold considering the fact that other NBA stars did not take some of the risks he did. In one interview, he stated something along the lines of dressing the way he did as a way of how he normally would dress even if he were not in the NBA. On the court, his iconic arm sleeves, various tattoos, sneaker game, headbands, and those memorable styles of braids brought basketball to a different level. With the exception of Denis Rodman in terms of tattoos, players did not present themselves to the public in a manner that was typically associated with hip-hop or overall just being authentic to themselves. During conferences and major events outside of games, athletes would wear business casual attire. Dressing in baggy clothes, jogging/sweat suits, and sneakers or Timberlands was rare for conducting the business side of the sports world. Not for Allen Iverson! Many were against his decisions to dress the way that he chose including teammates, the media, and Coach Larry Brown. Being that he was friends with many hip-hop artists and was a huge fan of the music, he was able to merge the two worlds of hip-hop and basketball. Iverson had a short-lived and controversial rap career in 2000 (stage name, Jewelz). Basketball would eventually revert to business casual attire when the NBA implemented a dress code in 2005. The league did not want its players to dress like “thugs” and “rappers” and felt that the athletes should dress as if they were coming to work, conducting business. In spite of this, Allen Iverson remained true to himself, comfortable in his skin.

*Note: Reggie Harding may be considered the first rebellious NBA player. You should check out his story on Celebrity Underrated (YouTube channel).

In 2002, Iverson’s controversial “Practice” Rant was born. During a press conference, he used the word “practice” 22 times. While people initially found the rant funny and only focused on a short snippet of the recording, the full context of the story was more intense. Iverson, Coach Brown, and basketball team manager, Billy King, had just gotten out of a meeting. They confronted Iverson about his lack of practicing. Trade rumors, along with many other issues circulated nonstop. Iverson carried the weight of an entire team on his shoulders. Worst of all, he just experienced tragedy when he lost a very close friend, Rahsaan Langford. Langford was shot eight times after an altercation with Gregory Fox; Langford was engaged to be married and had three children. It was an emotional time for Iverson. He had a very solid fan base in Philadelphia and wanted to let his fans know that he would remain a 76er. The words expressed came from a place of pain and frustration. Even still to this day, people believe that Iverson was some hard headed basketball player that did not value the importance of practice, turning it into a joke.

Forming an opinion of someone simply based on what we hear or see can make us less inclined to get to know that person (many people prejudged Allen Iverson). This can be a good or bad thing depending on the situation. I am intrigued by artists and athletes more so for who they are off the stage, screen, court, and field. In the spring of 2020, I decided to learn more about Allen Iverson. I heard his name frequently through family members, hip-hop artists and other athletes. I wanted to understand who he was. From what I have observed, Iverson has no issue with taking accountability for his actions. He continues to grow in various aspects and wants others to learn from his mistakes. He’s a role model to other athletes and every day people. Iverson is truly authentic and an icon. Now, I wonder what our beloved NBA would look like had he never rebelled. I enjoy listening to his perspective on the NBA’s current state and life overall. The lasting effect that he has left on the NBA and black culture goes unrecognized. Like any other public figure, he has faced plenty of controversy, yet he managed to beat the odds. Say what you want about the man, but you can’t deny his influence. I guess he will always be one of the most misunderstood figures in history.

Allen Iverson is bringing his premiere event back to Philadelphia (mme-llc.com)